Posted by Arushi Sachan on October 19, 2018 in NORTH AMERICA |One Comment 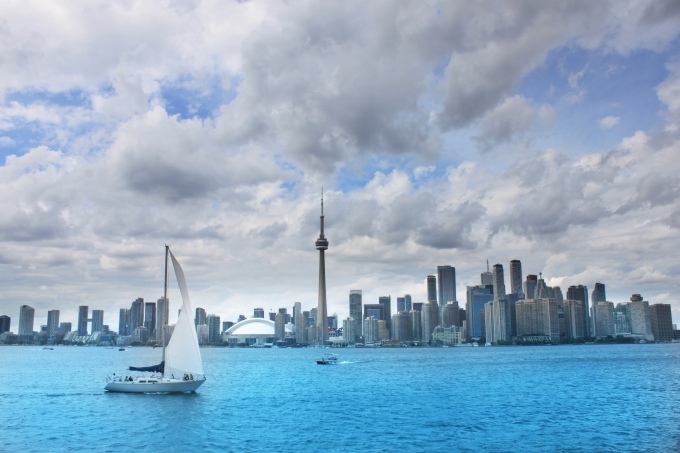 I was aware of Toronto’s somewhat “city-like” streak in the vast and nature-rich Canada, but that was a mere piece to this puzzle of a city. The skyscraper-struck skyline and multicultural gastronomies in its 8000 restaurants are a cherry on top to the largest city in Ontario (and fifth-largest in the continent). But what really adds to its credibility, are the warm locals, who represent vast diversity, making it a very friendly and accepting city to visit.

It is a given, that there is always something to do in Toronto. 365 days a year, Toronto is swamped with events for all kinds of people – from the adventure-lovers and busy-bees, to the introverted homebodies and leisurely – you are guaranteed to feel home.

I for one, cannot do without nature and food. Impressively enough, this city has everything I was looking for – rejuvenating nature, Instagramworthy-art and toothsome food. I started walking down from my brother’s University, UofT (which kind of dominates the downtown), and stopped by for a bagel-et-café at the famous Canadian breakfast/coffee chain, Tim Hortons. It was one of the many “once in Canada must-try” things, so I had to.  Down I went to the Art Gallery of Ontario, which is a haven for art-buffs with about 90,000 artworks and constant exhibitions. If you aren’t a big fan of art history, take a detour to a shoppers-paradise, the Toronto Eaton Centre mall. But for the keen art-lovers exploring the museum, it takes a solid two hours minimum to tour around. I didn’t have a lot of time to spare at the beautiful architectural delight, as I had some shopping to do in Chinatown.

While walking down the Spadina Avenue, I was amazed at Chinatown’s early-morning bustle on a weekday. Crowded as the streets were with people – trams and cars were plenty too. The smell of fresh veggies in the open markets and sound of people bargaining at hand-craft-shops was abundant. That’s when OneZo Tapioca, a busy bubble-tea shop caught my eye, and I wasn’t able to resist myself. It was a lot better than  ShareTea (another famous bubble-tea place in the city), even though it was costlier.

As I was stealing gazes at the colourful dumpling and dim sum restaurants while walking, I stumbled across a hidden walkway, just like any other, but with art beautifully splattered all over. I googled to see if I was by any chance in a tourist spot – turns out, it was Graffiti Alley – a walkway of murals with no real website online. It showcases a series of writings including those of SKAM, stretching from Spadina to Portland Street. An hour of clicking pictures amid remarkable graffiti earned my Instagram gallery some beautiful shots.

It was about time that I had lunch, and a poutine place was just around the corner. Note that before this trip, which was my first time in Canada, I had no clue what “poutine” meant or that it even existed. It is a flavourful Canadian dish, a unique version of potato fries, topped with melted cheese and gravy. Poutini’s House of Poutine had this dish mastered, as it is Trip Advisor’s top rated place to try the dish out for first-timers. Their “traditional poutine” with vegetarian gravy (comes with beef and gluten-free gravy also) was a savoury delight and I had to pack an extra to go.

I walked down the scenic path to get to the harbour. On my way were the tourist-famous – CN Tower and Rogers Centre. I had already been to CN Tower, so I didn’t stop to  go to the top floor’s viewing deck, but I did still get some pretty pictures by the square. If you are on this walking tour, you have to check out the CN Tower viewing deck, as it offers a stunning perspective of the city with panoramic skyline views and a 360-degree tour.

It was about 4 pm when I arrived at the harbour, and I wasn’t so tempted to explore the lush green islands across from me on a ferry, so I stopped by at Harbourfront Canoe & Kayak Center and picked a Kayak to paddle to the islands instead. The sun was casting its good-bye pink and purple hues at the clouds over the city-scape and flocks of birds chirped away as the evening breeze intensified the waves. It was surreal in every way, how nature married the city.

KAYAKING BACK FROM THE ISLANDS

To round out the day’s tour, I dined in the cosy low-lit-candle-light Scaddabush Italian Kitchen & Bar near CN tower. The Italian delights in Chef Adrian Andaya’s kitchen are made from scratch, be it focaccia bread, ½ lb signature meatballs or sauces, and you can even watch the fresh mozzarella being made live. I started with the “Naked Mozzarella” paired with Prosecco before delving into the main course – the “Gnocchi Gorgonzola”, which was a mix of gnocchi with mouth-melting balsamic mushroom and caramelized onions. I was too full for a dessert, but I would’ve tried something if I could.

To sum it up, Toronto was an urban utopia to me, not void of nature or laid-back people for that matter. People in the street were in a rush, but they did pass smiles. It is just the perfect balance every busy city in the world could look up to.